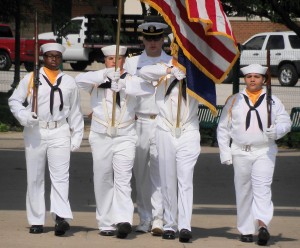 The Sea Cadet Mission
“…through organization and cooperation with the Department of the Navy, to encourage and aid American youth to
develop, train them in seagoing skills, and to teach them patriotism, courage, self-reliance and kindred virtues.” NSCC Charter – 36 USC 1541.

Since 1958 the Naval Sea Cadet Corps has been committed to providing American youth with a drug and alcohol free environment to foster their leadership abilities, broaden their horizons through hands-on training and guide them to becoming mature young adults.

The U.S. Naval Sea Cadet Corps is a nationwide organization dedicated to helping American youth realize personal success and achievement through a nautically oriented training program. Through Sea Cadet leadership, young Americans ages 11 through 13 (Navy League Cadets) and ages 13 through 18 (Sea Cadets) develop interest and skill in basic seamanship and its naval adaptations, while learning the value of patriotism, courage, self reliance, teamwork and accountability.

Sea Cadets train aboard U.S. Navy and Coast Guard ships and shore activities, and are authorized by the Secretary of the Navy to wear Navy uniforms marked with Naval Sea Cadet insignia. Over 300 Sea Cadet units are opening in nearly every state as well as Puerto Rico and Guam, with some 9,500 members. Locally we participate in parades, color guards, marksmanship training, law enforcement and fireman training, and other activities. We also work on community service activities.

Membership in the Sea Cadets allows teenagers to sample military life with no obligation to join any branch of the armed forces. Should cadets decide to enlist in the Navy or Coast Guard, their training may allow them entry at an advance paygrade. The Naval Sea Cadet Corps affords equal opportunity for participation to all young Americans regardless of race, color, religion, gender or disability.

This program is NOT for everyone. Those who join thinking it’s playing “dress-ups” in sailor suits, or join to lose weight, or join because they’re forced into it by parents or others, generally don’t stay long. For those who want to learn the core values of Honor, Courage, and Commitment, and about Navy life, and want some discipline in their life, this is an excellent program. The training opportunities for Sea Cadets are tremendous.

Eligibility Requirements
To qualify for the Pimiteoui Division of the U.S. Naval Sea Cadets, you must be:
• 10 years or older and not have reached 18;
• a citizen of the United States;
• a full-time student in good academic standing;
• unmarried and of good moral character.
• An annual medical examination similar to a high school sports physical is required for all cadet applicants to the Naval Sea Cadet Corps (NSCC) or Navy League Cadet Corps (NLCC).
• No one will be denied admission to the NSCC/NLCC due to a medical disability. Where a medical condition precludes full, unlimited participation, a Request for Accommodation (NSCADM 015) may be presented by the parent or guardian for review so the cadet may participate in NSCC activities to the maximum extent possible.
• Adult applicants must be in good health commensurate with their age group and be free from any ailment or condition that would prevent them from satisfactorily performing their primary duty of supervising youth. NOTE: Adults not physically qualified to perform all duties may still participate with a waiver from NHQ considering the parameters of their expected contribution to the NSCC program.